State of the Art Techniques for Nanocatalyst Characterisation

We have recently demonstrated the structure elucidation of organic adsorbates even at low coverage using synchrotron powder X-ray diffraction (SXRD) and Rietveld refinement by making use of the Bragg repeating crystalline porous templates such as zeolites. As an alternative to the spectroscopic techniques, the bond distances and angles of these organic moieties based up diffraction evidence particularly with respect to the rigid surface active sites of zeolite structures (SAPO34, H-ZSM-5) can be measured within experimental errors. Encouraged by this work, we have built a high pressure, low dead volume catalytic gas-cell using on-line mass spectrometer with optimized high brightness X-ray beam for diffraction to monitor the structure-activity relationship at Beamline I11 in Diamond, UK. This setup can allow a new approach to carry out catalytic studies under operando conditions based on diffraction, which will give understanding on reaction mechanisms, leading to development of new catalysts.

In collaboration with staff at station I11 Diamond Light Source, a reactor cell has been specifically designed for catalysis studies under operando SXRD in a controllable manner. The stainless steel capillary cell support holder has been built with strong rigidity to ensure the alignment of the capillary for low and high temperature experiments (see Fig 1). A both-way open-ended borosilicate capillary (diameter of 0.7 mm) has been mounted by two brass capillary holders and glued using araldite; over the reaction temperature and pressure (up to 10 bar), no gas leakage is ensured. Within the both-way open-ended capillary, we have placed a zeolite sample which is sandwiched between two pieces of quartz wool in the capillary to prevent sample dislocation. One end of the capillary has been connected to a gas inlet (vapour from a liquid saturator kept at room temperature with carrier gas can be added). The other end is connected to a quadruple mass spectrometer (MS) that analyses the gas composition on-line with simultaneous SXRD data collection. In addition, the dead volume between the MS and the reactor cell is kept minimal under a slow flow rate. For the heating of the sample, a hot-air blower is mounted at 5 mm from the capillary. The temperature of the hot-air blower had been calibrated against a high quality standard Pt powder sample. A separate fan  has been mounted 150 mm from the hot-air blower to reduce the heat conducted to the detectors. In general, powder X-ray diffraction measurements that are performed using capillary sample holders requires high speed spinning to allow an optimal measurement statistic. However, it is technically extremely difficult to achieve spinning with the current set-up. Therefore, a constant capillary rocking generated by the sample stage holder is currently employed to reduce the loss in data quality. 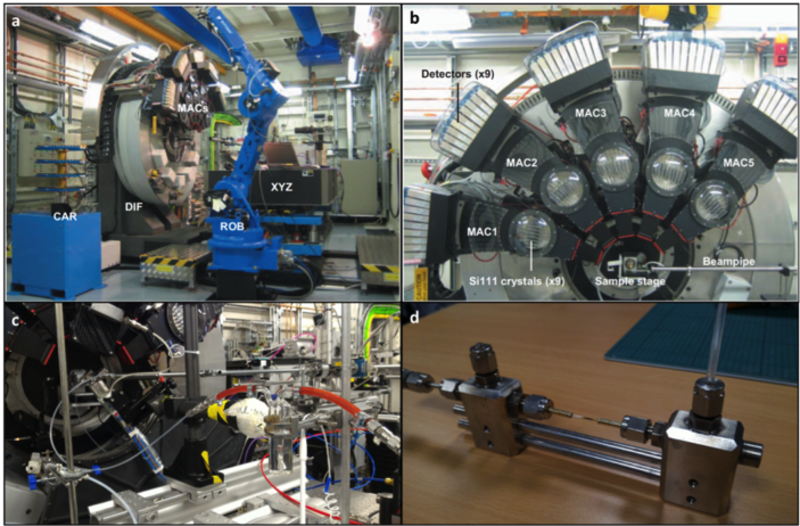 Figure 2. (a) Rietveld refinement profile of the H-ZSM-5 sample with flowing stream of methanol vapor measured at 25 °C (Rwp = 6.524%, χ2 = 2.680), and (b) its corresponding Rietveld derived crystal structure showing an asymmetric unit. Atoms are represented in ball/sticks: blue = Si/Al, red = O, black = C. No hydrogens are plotted for clarity.

Edman Tsang and his team are developing a new method to evaluate adsorption strength of substrate molecule on surface of metal nanoparticle by 13C NMR, which can guide industry for rational design of supported metal catalysts for some important catalytic and electrocatalytic reactions in energy and chemical sectors. The initial results have been published in Science (8 April 2011 issue) and the following highlights the key development.

The search for more efficient heterogeneous catalysts remains critical to the chemical industry. The Sabatier principle of maximizing catalytic activity by optimizing the adsorption energy of the substrate molecule could offer pivotal guidance to otherwise random screenings. The Oxford team show that the chemical shift value of an adsorbate (formic acid) on metal colloid catalysts measured by 13C nuclear magnetic resonance spectroscopy in aqueous suspension constitutes a simple experimental descriptor for adsorption strength. Avoiding direct contact between the 13C atom and the metal surface eliminates peak broadening that has confounded prior efforts to establish such correlations. The data can guide rational design of improved catalysts, as demonstrated in their papers for the cases of formic acid decomposition and formic acid electro-oxidation reactions.

In 1913, the French chemist, Paul Sabatier, introduced a qualitative concept in chemical catalysis which described the appropriate interaction between catalyst and substrate as a balance between extremes. If the interaction is too weak, the substrate will fail to bind to the catalyst and no reaction will take place; if it is too strong, the catalyst will be blocked by the substrate, intermediate or product, hindering turnover of the catalytic cycle. The Sabatier principle is best illustrated by Balandin’s volcano relations between reaction rates and adsorption energies, which was employed from the study of catalytic decomposition of formic acid over transition metals by Sachtler and Fahrenfort in 1961. However, various thermodynamic data, such as heat of formate or oxide formation, were actually used to estimate the adsorption energies in these early studies. These bulk thermodynamic properties established under different reaction conditions were not the best descriptors for surface adsorption structures and energies. Over the past decade, theoretical calculation of adsorption energies on solid surfaces using density functional theory has become practical on account of enhanced computing power, though data to validate this complex modelling under realistic reaction conditions [i.e. in liquid phase or under pressure, rather than in ultrahigh vacuum (UHV)] have been scarce. In addition, Somorjai earlier demonstrated that face specificity is a characteristic property of adsorption, which implies that modelling of working catalysts that comprise different surfaces while taking complexities such as solvent effects, surface specificity and adsorbate-adsorbate interactions into account may not be a simple task.

Traditional resonance methods like Electron Spin Resonance (ESR) and Nuclear Magnetic Resonance (NMR) can yield a wealth of information about the electronic interactions between atoms under non-UHV conditions in the liquid or solid phase. Studies of chemisorption of small probing molecules such as CO and ethylene on metal surfaces by both solution and solid phase NMR were reported. A broad NMR peak was observed due to particle anisotropy and magnetic field in-homogeneity. Newmark and Bradley employed solution phase 13C NMR to probe adsorption of13CO onto different metal colloids in solution. They showed that the tumbling motion of nano-sized metal particles in solution is sufficiently fast to reduce the particle anisotropy in magnetic field over the liquid suspension of particles. However, all the above works encountered significant Knight-shift effects in their NMR peaks due to the coupling of conduction electrons from the Fermi levels of the metal particles with the probe 13C atom in direct contact, which severely perturbed and broadened the 13C chemical shift values (peak-position and peak width are affected ranging from few to hundreds ppm). This problem precluded the potential use of chemical shift values for assessing adsorption strength until our initial work on the adsorption of formic acid on ruthenium nanoparticles. Tsang and his group showed that the presence of the oxygen spacer atoms in the adsorbed formate substantially reduces the Knight-shift effect on the 13C nucleus, as it is not directly coupled to the metal surface. This enabled the observation of sharp adsorption peaks on nano-sized Ru metal.

The Oxford team later show that the unequal sharing of bonding electrons around the 13C nucleus of the adsorbate molecule on the metal surfaces gives rise to variations in 13C chemical shift values, which correlate to the adsorption states. They found that the measured chemical shift of formic acid on various surfaces shows a direct linear relationship with those surfaces’ catalytic activity for formic acid decomposition in water, which can be used to guide the identification of active catalytic phases. The chemical shift value is also dependent on the type and size of metal: electron rich metals (Au, Ag, Pd) show a greater particle size effect on their chemical reactivity than relatively electron poor metals (Ru shows no size dependence on chemical reactivity). In addition, adsorbed formate is also considered an important intermediate on metal catalysts in formic acid electro-oxidation (to CO2 and H+) in direct formic acid fuel cells (DFAFC). Thus, the chemical shift of the adsorbed formate is used to guide rational catalyst design for this important reaction, leading to new improved catalysts. These materials identified show superior activity to catalysts previously reported in the literature.

In order to strike an understanding on structure-activity relationship it is important to characterise 3-D atomic-scale tomography of catalyst structure. As a result, in collaboration with Oxford Material Department (George Smith FRS), Atom Probe Tomography (APT) has been developed by the Oxford Chemistry team for the first time to reveal the internal structure of nanoparticles.  APT relies on generating high electric fields (~3 – 5 V/Å) at the apex of a needle-shaped specimen. On top of this, an additional short (ns) pulse removes ions in a controlled manner into a high-resolution time-of-flight mass spectrometer equipped with a single-ion-sensitive detector. APT thus combines atomic-scale position mapping with single atom chemical identification. Previous work using this method has successfully investigated the effects of gaseous adsorption on Pt-alloy surfaces. The figure below shows clearly the core-shell structure of the synthesised Ag@Pd nanoparticles. In the atom maps, it is apparent that the surface of the particle is very rich in Pd and the core is entirely composed of silver atoms.

To analyse the elemental concentrations in detail, slices were taken through each particle for atomic depth profiling. As shown in the figure, the interfaces between core and shell were very sharp (less than 0.5nm wide, in both the samples shown). Eight individual 1:1 or 1:3 samples were investigated using APT. From these, clear reproducible differences were seen in the thickness of the Pd shells between the two types. The shells of the 1:1 samples were no more than 1-2 atomic layers thick, while the 1:3 samples had Pd shells that were all significantly thicker, of the order of 5-10 atomic layers. (Exact distances are dependent on the APT reconstruction parameters). Taking the small degree of size variation and self-nucleation into account, the determined compositions match with the recipe ratios. Very interestingly, much higher activity for hydrogen production is now confirmed over this ultrathin Pd shell of the 1:1 sample than the 1:3 sample, suggesting that the electronic promotion by underlying Ag is rather short range, only over a few atomic distances. It is envisaged that the electronic effect is the combined result of charge transfer from the difference in work function of the two metals with a contribution from a slight expansion in the Pd lattice exerted by the underlying Ag lattice, which has the same f.c.c. crystal structure as Pd but a 5% bigger lattice parameter (isomorphic effect). It is believed that the former effect is more important in our multi-faceted nanoparticles since the difference in work function can account for the variation in activity.

It is noted that the Oxford team also observed a strong but short range electronic promotion from metal to cerium oxide at the catalyst interface in the water gas shift reaction. This clearly implies the nano-materials interface within a few atomic distances plays a key role in catalysis. The Oxford team now demonstrate the prime importance of careful particle engineering through controlled nano-synthesis in order to obtain the optimum catalysts for this reaction. More detailed information in our preliminary paper (nature nanotechnology 2011) about activity, selectivity, repeated testing of same catalyst, post-mortem analysis of used catalyst and assessment of applicability of the present catalyst and technology are provided. 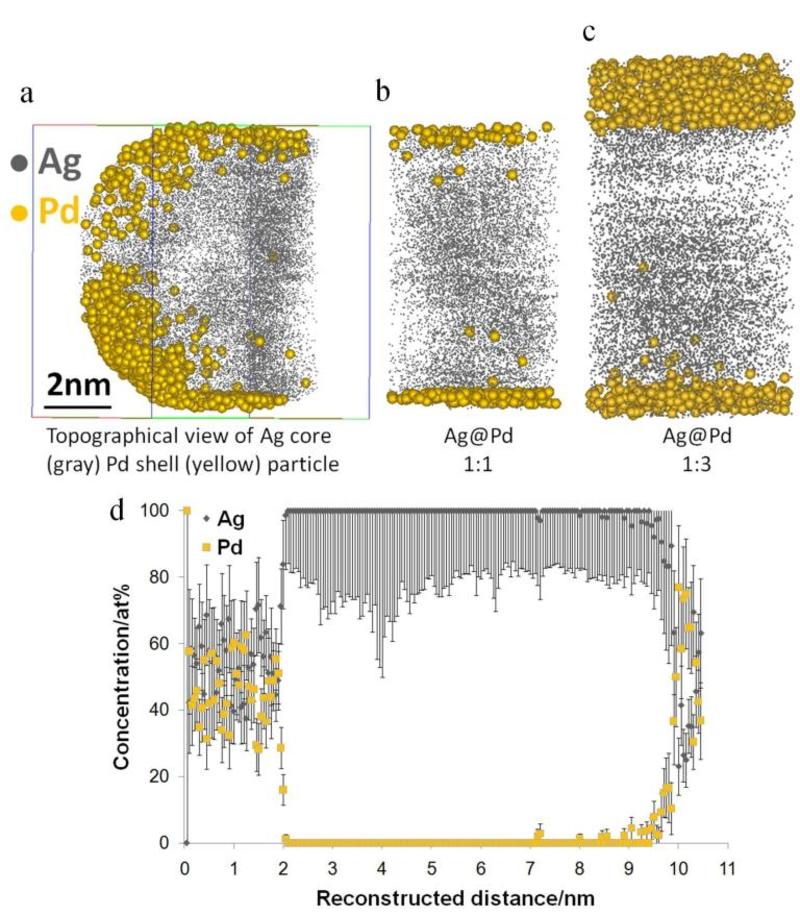 Figure 4. (a) Atom Probe Tomography (APT) data from Ag@Pd nanoparticles. The atom map (5a: upper left) of an individual Ag@Pd nanoparticle clearly reveals the core/shell structure, while the column sections of atom maps (5b and 5c, upper right) taken through the Ag@Pd nanoparticles with as-synthesised recipe compositions as indicated shows the differences in shell thickness. A composition profile of Ag and Pd through a 1:3 Ag@Pd core-shell nanoparticle (5d, lower), showing a pure Ag core with 5-10 atomic layer thickness of Pd shell atoms.